When weaponizing your favorite die-cast metal cars for use in gaming, there aren't exactly a wealth of in-scale options. 1:64th scale roughly translates to 20mm gaming miniatures, which are few and far between. Most of the bits currently in my possession are either cartoonishly large (Games Workshop, Privateer Press) or a laughably small (Flames of War, Dropzone Commander) when placed on a vehicle. This can work - some of my favorite conversions are smattered in Ork bitz - but usually give the cars an over-the-top, "heroic-scale" vibe to them.

The go-to for in-scale kit seems to be Stan Johansen Miniatures' Road Warrior line. I've also seen encouraging posts regarding Sgts' Mess's weapon kits as well. I plan to order a smattering of both soon and report back my findings.

In the meantime, while perusing the new release wall of my FLGS, I found the following... 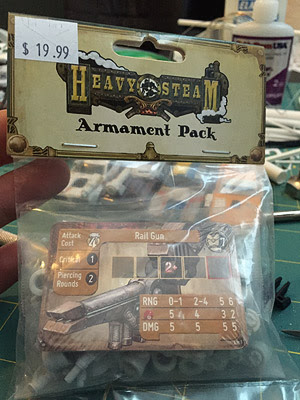 A peek through the packaging had me calculating part per piece ($1 per arm) and that if the weapons looked silly on the cars they'd probably make great bionics on 40K Orkz. 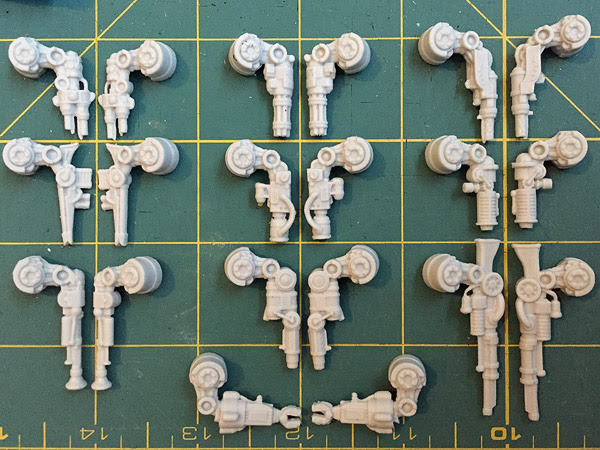 On opening the pack I found 10 weapon arms, each with a right and left variant. Among the 10 weapons, there are some immediate winners with little need for converting before use. I count the gatling gun, blunderbuss and (sniper?) rifle among these. Some have far less obvious use - the short, double-barreled arm and claw/magnet arm chief among them. However, with a little imagination and a sharp exact, even these can find purpose somewhere. 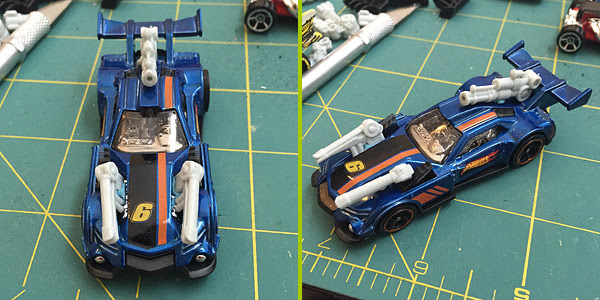 "Scorpio" with linked small lasers and a rear-mounted mortar/cannon? 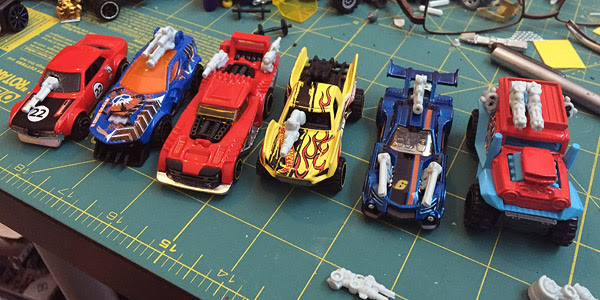 As you can see, they're still a bit large/cartoonish, though not as bad as using straight 28mm or "heroic scale" bits. I think the blunderbuss (with end chopped off and barrel drilled out) scales nicely and is likely to become a recoil-less rifle (see above, far left). Even the claw arms can be cannibalized into something else. With a few cuts and two holes drilled out, they make great micro-missile launchers (see above, far right).

I'm glad I got the kit - I'd been wondering how to arm my more crazy/futuristic looking cars for awhile now. The Heavy Steam Armament Pack worked great for this purpose and had prototypes up and running in no time. However, despite its ease of use and my pleasure with the kit overall, I find it unlikely I will buy another of these packs for use in Car Wars. First, the material has an almost rubbery consistency that makes it easy to cut but soft on taking additional drilled or carved detail. Also, with 40% of the arms needing heavy modification to make them useful/recognizable., I feel the price point is just a tad too high.

Bottom-line: If you like the aesthetic and don't mind a bit of extra conversion work, one of these should work its way into your toolbox.